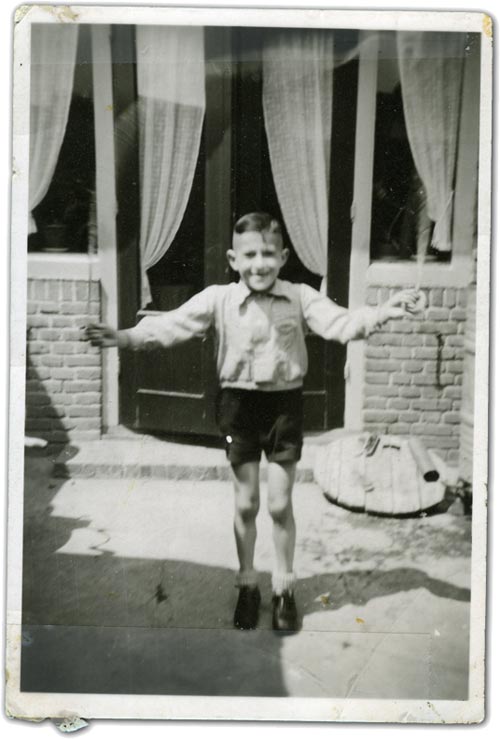 Jack Eljon was not yet three when the war broke out. His father, Maurits, was an office employee at the Amsterdamsche Bank and married to Elisabeth Hamburger.

Father Eljon was fully aware of the situation in Germany. When the war broke out, the Eljon family immediately moved to friends in Camperduin, who ran a camping site where the Eljons normally went camping in the summer.

Because of that, the outbreak of the war seemed a bit like the start of a holiday to me. But this time we weren't camping. We had a room in the house of Aunt Trien and Uncle Willem. They had three children: an older boy, and a boy and a girl of my own age and I played a lot with them. At this hiding place, our first, I had a wonderful time. 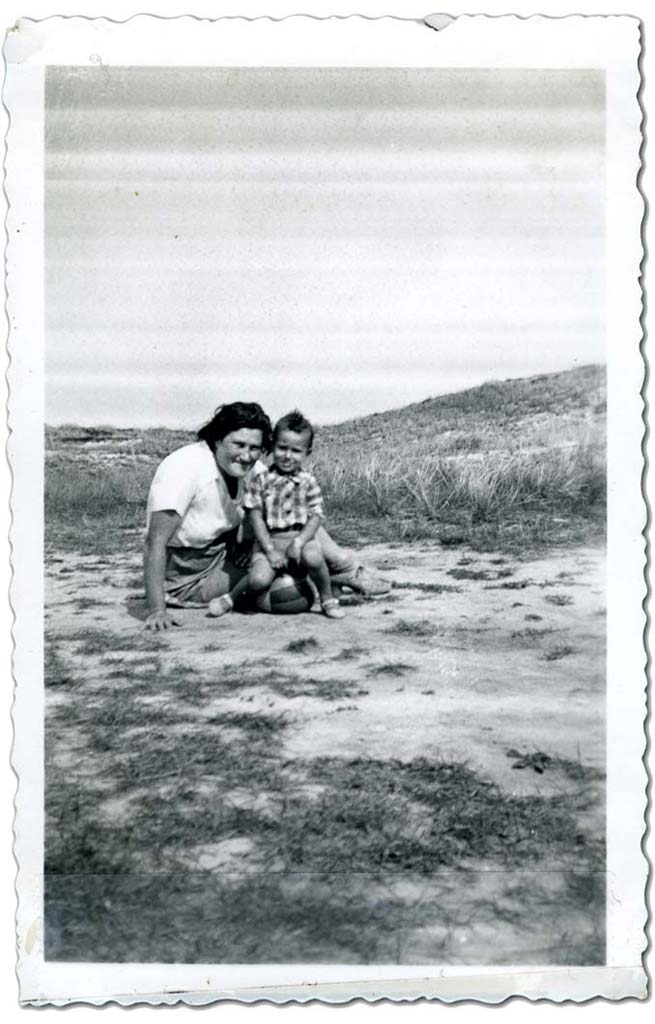 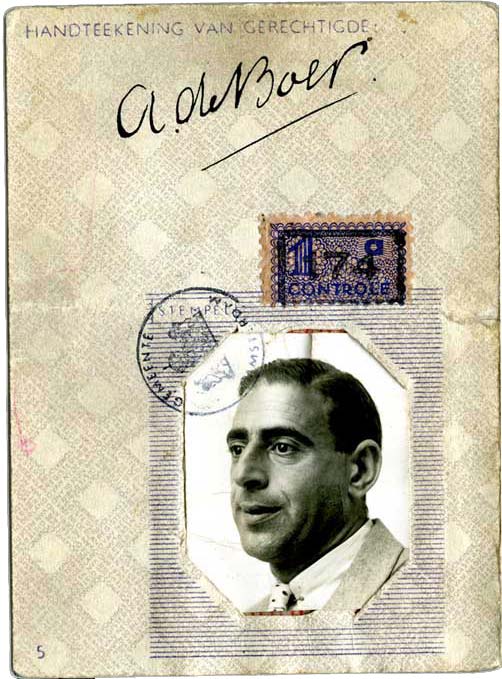 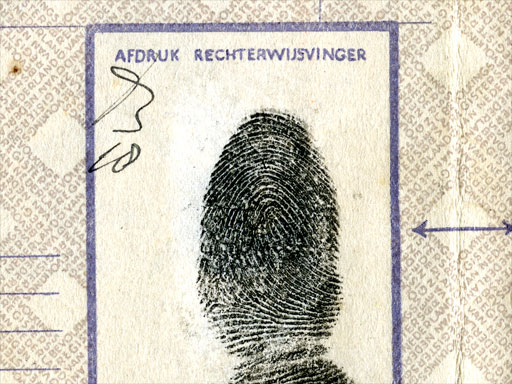 At the end of 1940 more and more Germans came to build bunkers and they would regularly come on to the land of the camping site.

One day when I was playing in the sand a German soldier spotted me. I looked up and I saw that he directed the barrel of his gun at me, as if I was an animal. I ran to Aunt Trien's house in a panic, and cried my heart out when I got there.

Jack was sent to his Aunt Greta in Haarlem. She was Jack’s father’s sister and in a 'mixed marriage' [that meant she was married to a non-Jew. People in mixed marriages were originally exempt from deportation, but they did have to stick to the strict anti-Jewish measures]. Aunt Greta’s neighbours were collaborators. One day they rang the bell to say that there would be a house search and they suggested leaving Jack temporarily with them. They would surely not be house-searched since they were members of the NSB.

In the night before the house search Aunt Greta lifted me across the fence between the two gardens. It was a very high fence and she had to lift me above her head. ‘Have you got him?’ I heard her ask. ‘Yes, just push him over.’ So she did and I fell a little distance and on the other side they caught me. Those collaborating neighbours were good to me.

At the end of 1941, when the measures became stricter, Jack's uncle and aunt decided to find a hiding place for him deeper inland.

Jack was taken to a family in Zeist by the Utrecht Students Resistance. From then on his name was Henkie Mulder and he had promised his aunt he would never again say his real name. Jack had a very bad time at this address. He was beaten and he refused to eat.

Whatever they put in front of me, I didn't eat it. In order to force me, two women held my arms and a third one pinched my nose. The moment I gasped for air, one of them stuffed the food into my mouth. Then they forced my jaws together. But I didn’t chew, and as soon as they let go of my chin, I spat the food out. After which they stuffed it back in again. If I did swallow some food in the end, I usually brought it back up again. They regularly stuffed the vomit back into my mouth.

When Jack turned six he was allowed to go to infant school. It was reasonably to his liking and he made some friends there. One morning he was called out of the class to go to the headmaster. His hiding address had been betrayed and he had to get away instantly.

They put me inside a baker's cart that happened to be at the school gate. When I was in the part of the cart where normally the bread is stored, the baker's boy closed the lid with a bang. Darkness. The bumping told me that the baker's boy had started cycling, out of the street, out of the village. After a while I couldn't bear it any longer in the dark, and I carefully opened the lid a little bit. The baker's boy reacted immediately. ‘You can open the lid when I say you can open the lid!’ And he banged the lid shut again. All was dark again.

Jack found a temporary shelter with a minister in Maarn.

Then there were a number of addresses Jack doesn’t have any memories of.

In the autumn of 1943 Jack was ferried across the river IJssel at Deventer. On the other bank he was taken care of by the Red Cross. A lady from the Red Cross was very kind to Jack and he still has good memories of that period.

Deventer stole my heart then. After the war I became a supporter of the football club Go Ahead. I went to all the home games as well, and I ordered my tickets from a tobacconist in Lange Bisschopstraat. Where the bridge was then, is now the motorway the A1. When I drive past that spot I always stick my hand up to greet Deventer.

Via a number of intermediate addresses Jack ended up in Zwolle.

I hadn’t been there for very long when the bell rang. They answered the door and it was the couple's daughter. At the door a terrific row developed. From the top of the stairs I heard the daughter say: ‘If you don’t get rid of that Jewish child we won't come to see you any more.’ When she said that, I thought: ‘Oh good, I won’t have to stay here very much longer.’ And I was right. 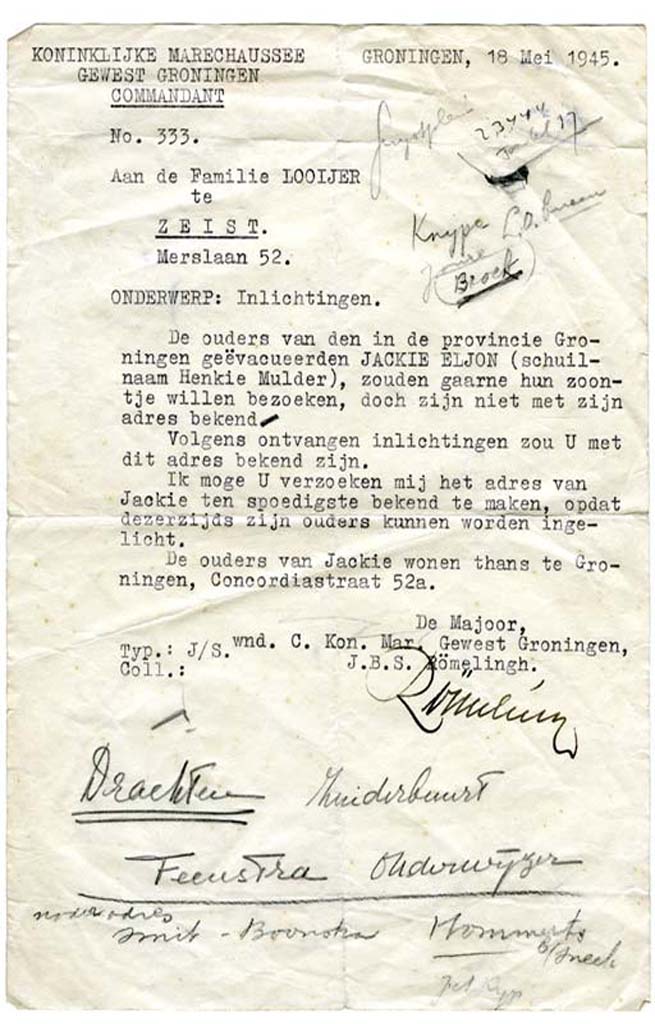 In the summer of 1944 Jack came to stay on a farm with the Langeraap family, who took him in lovingly. There were two other Jewish people in hiding there. The Langeraaps had five children and in the period Jack was there, a sixth child was born. Jack went to school like the others and learnt to speak Frisian. A hiding place had been created for him in case of an emergency.

Once during that winter there was a house search, in early 1945. Between the slanting roof and the floor, a plank had been fitted, leaving a small space behind it, not much bigger than a gutter. It was a bit like a crawling space and a boy my size could just fit in. Through the cracks I saw the boots pass by. I was holding my breath, but I knew they wouldn't find me, because it was unthinkable that a person would fit behind the panelling. 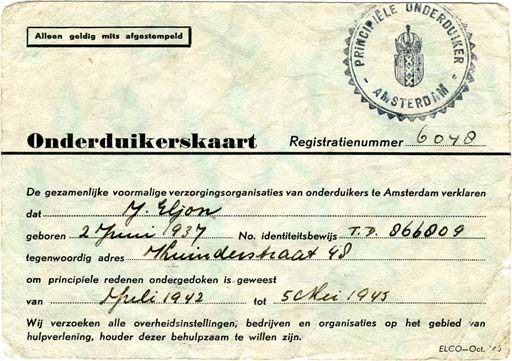 The other Jews in hiding, who were on the land at the time of the raid, weren't caught. When Friesland was liberated at the end of April, the family had to know what 'Henkie Mulder's real name was so that it could be checked if his parents were still alive. But Jack wouldn’t say his name.

They begged me, they hit me, they tried all sorts of things to make me say name. ‘I don’t know,’ I kept saying. ‘I don’t remember what I was called.’ But to myself I said: ‘My name is Jacky Eljon, I know perfectly well.’

Jack's mother was in Westerbork at that time. Lists were displayed there with the names of the children who had 'surfaced' again. But Jack's name wasn't on it of course. A lady from the Red Cross took Jack to Sneek to meet a number of women who were looking for their children. Jack had to see if his mother was among them.

A bit further on there were twenty women with shaved heads. I saw her at once, but I wasn’t allowed to go to her, I had to start at number 1. So I walked past all those women with no hair. They all wanted to keep me, because they'd all lost children. At the end of the row, in 17th place, was my mother. I jumped onto her knees. At last, after four years, I had her close to me again. I have never felt so at one with her as in that classroom in Sneek.

Jack's father, too, proved to have survived the war. After a short period in Westerbork the family returned to Amsterdam.

Afterwards everything turned sour. I could not forgive my parents for having given me away to strangers. You just don't do that. I cursed them for it. The feeling that they left me in the lurch never left me. A child of four cannot understand that you allow it to go into hiding for its own good. I myself would never let my children go into hiding on their own; I’d never give them away to strangers. 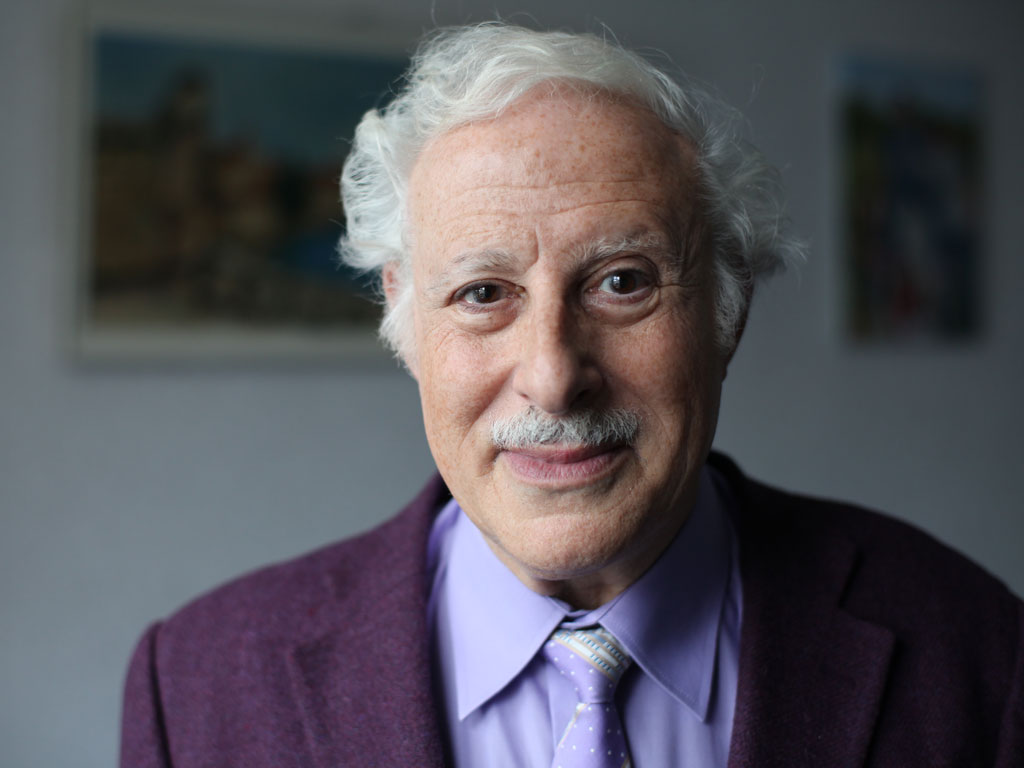