As long as you get married later 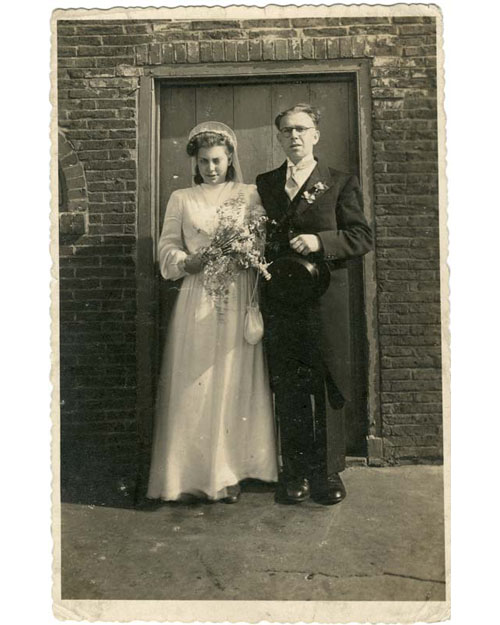 Bennie (short for Benjamin) was born into a family of five. He had a brother Willie, two years younger and a sister, Rebekka, six years younger. Bennie’s father, Hartog Kosses, was a cattle dealer and butcher, a kosher butcher. His mother’s name was Roza Kosses-Meijer. Because Hartog Kosses refused to become a member of the fascist-oriented organisation Landbouw and Maatschappij (an amalgamation of a number of farmers’ unions), his business was getting ever slacker. At the beginning of the war, Bennie started to work for an uncle, also a butcher. In 1941, when his uncle’s business was confiscated, Bennie went to work for a friend, a Christian butcher, Bram Buzeman. The atmosphere was getting ever grimmer. 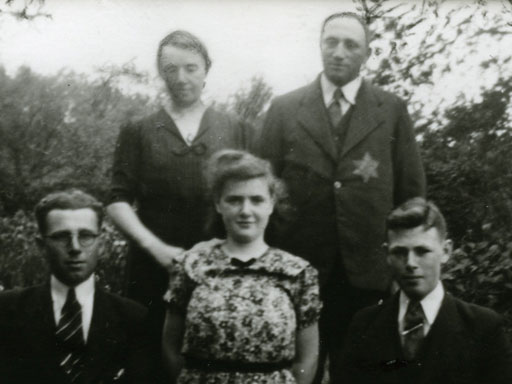 One day, when we were working in the abattoir in Oude Pekela, a butcher came along who was a member of Landwacht Nederland [a Dutch territorial defence unit organised by the Germans]. In my presence he said: ‘Bram, you have to get rid of that Jew servant because he spoils it.’

Bennie and his uncle decided to go into hiding when the village policeman warned them that he would be coming to arrest them the next day.

It sounds like an obvious decision, but it wasn’t. My younger brother Willie went and reported voluntarily at Camp Westerbork on 17 August. “I’m not going to go into hiding,” he said, “or they will come and get our Mum and Dad.” He was deported to Auschwitz and killed there.

The first person they went to see was a barber they knew in Nieuwe Pekela. They arrived in the evening, but nobody came to the door. In the morning the barber let them in.

At the end of the afternoon the barber came upstairs, nervous and agitated: ‘My wife says you’ve got to leave, before the children come home, too. Our house is too small to have people in hiding.’

Bennie’s uncle also knew a farmer in Ommelanderwijk, and there, too, they arrived in the night. They were welcomed. The next day Bennie heard the farmer’s wife tell the baker and the grocer that she needed some extra stuff, without food coupons, because there were Jews in the house.

‘This is useless,’ I said to my uncle. ‘I’m going to leave tonight.’ ‘In that case we’re going to go together.’

Bennie and his uncle stayed for four weeks with a farmer called Van der Woude in Wildervanksterdallen. Then there were several razzias in the area. By now, Bennie’s uncle’s wife and their children were also looking for addresses to go into hiding. Van der Woude did not have room for them all and Bennie decided to leave.

After one day and one night in the stable of yet another farmer where Bennie wasn’t allowed to stay, he left again for Oude Pekela. There he stayed for a short while with a Jew he knew Hayo Kampion, who had a mixed marriage [a marriage of a Jew and a non-Jew. People in mixed marriages were originally exempt from deportation, but did have to stick to the strict anti-Jewish measures].

Kampion gave me new clothes – the clothes of his unmarried brothers who had already been deported.

Bennie heard that his parents had gone to Amsterdam. He decided to follow them there.

The next day I met my parents and my sister again. They weren’t well. They had too little to eat and constantly had to barter on the black market. This is no use either, I thought. I’m going to leave. I’ll go to Oosterbeek where a place had been found for my uncle’s two children. 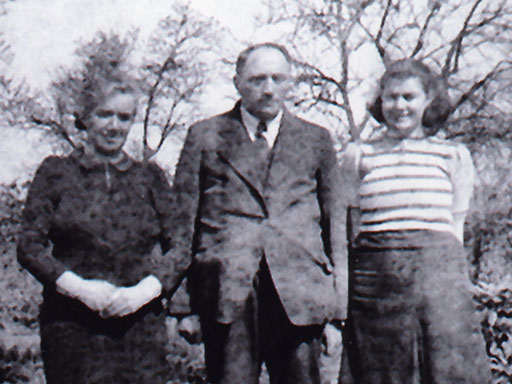 In Oosterbeek Bennie did not feel safe, and again there was very little to eat. He only stayed there for a week.

Then Bennie found an address in Arnhem.

Everything revolved around money there. I had to pay wherever I stayed the night, but in Arnhem they wanted a hundred guilders a day [roughly equivalent to € 520 now].

Bennie decided to go back to Groningen. He knocked on the door of the Beuker family in Stadskanaal. He was welcome there. After a week however, the living quarters of the farm were requisitioned by the Germans. Members of the NSB, the National Socialists, came to live there. The farmer partitioned off a hiding place for Bennie in the attic.

For two weeks I sat in that partitioned off space along the slanting wall of the roof. It was dark there, and the only thing I had was a bucket to relieve myself. One evening they fetched me down: the NSB people had gone out for the evening and I could wash and eat with them. At the table I said: ‘I can't stand it any longer up there, I want to leave.’

Beuker, the farmer, arranged a place for Bennie with the Drenth family who lived nearby. Bennie would be staying there till the end of the war. The Drenth family consisted of father Willem, mother Hindertje and the two daughters Lammie and Fennigje. There was already another uncle of Bennie's in hiding with the Drenths, together with his wife and children. This uncle was not too happy with Bennie’s arrival.

They made me feel straight away that I wasn't welcome, that I intruded upon their world – one room of 20 square metres, which they now had to share with me night and day.

Even more people moved in with them: Bennie’s uncle, with whom he had originally gone into hiding, was still in hiding with his wife and children at the house of Van der Woude in Wildervanksterdallen. They had to leave. The money was running out and Van der Woude felt that the 15 guilders a week per person he was getting now was too little for the risk he was running. Another Jewish couple, who also had nowhere to stay, also moved in.

We then lived night and day, the 14 of us, in a room of 20 square metres. Because there were only two bedsteads, there were straw mattress and blankets everywhere on the floor at night. We got up early and stuck to a strict rota for washing and dressing so that it wouldn’t turn into chaos.

Because Lammie, the daughter of the family, went to work in the local NSB office the Germans never suspected anything and didn't raid the farm. This made the neighbours think that the Drenth family were collaborators. In the meantime Lammie did all sorts of courier work and Resistance jobs.

Several times Lammie was beaten up by old school friends for having an NSB badge on her coat. She would come home black and blue with her clothes all in a mess and torn. 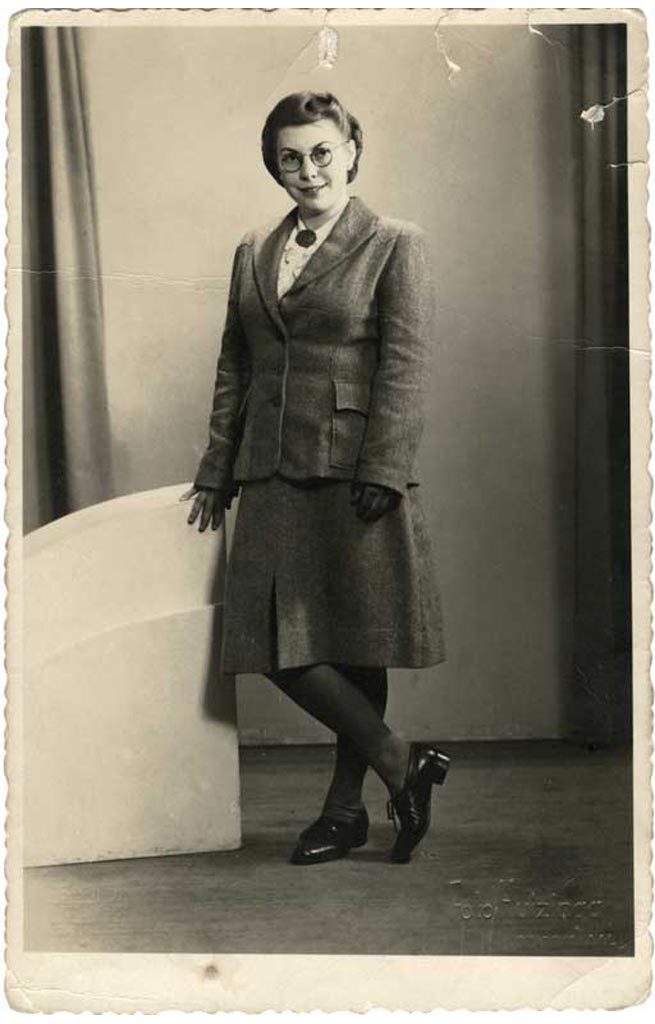 Bennie and Lammie became ever closer.

Because condoms were so scarce and therefore very expensive, you made each of them last a long time. Afterwards you washed it out, blew up the balloon, emptied it out and let it dry. Then you pulled it through talcum powder and rolled it up the way it had come in the packet. Sometimes you took thrift too far and a condom would tear. That happened to us.

The confinement took place in the living room on 10 December 1944. It was a girl. After the liberation, Bennie and Lammie got married. 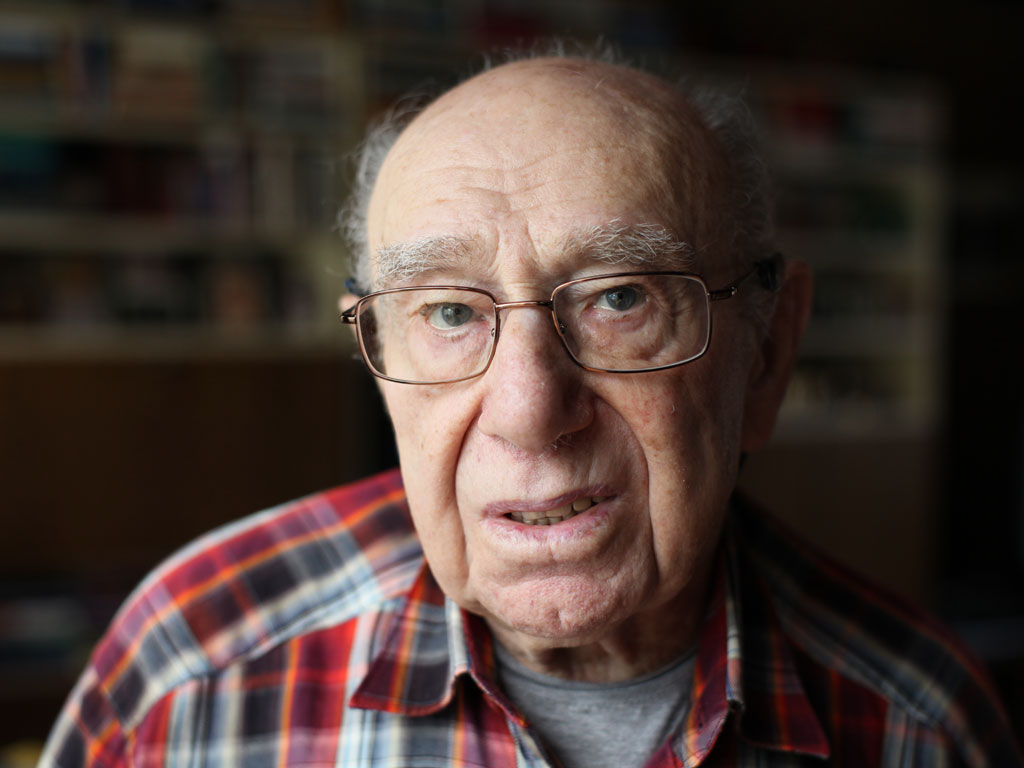 Next: Michel Goldsteen
My fathers father