A crying fit of many years 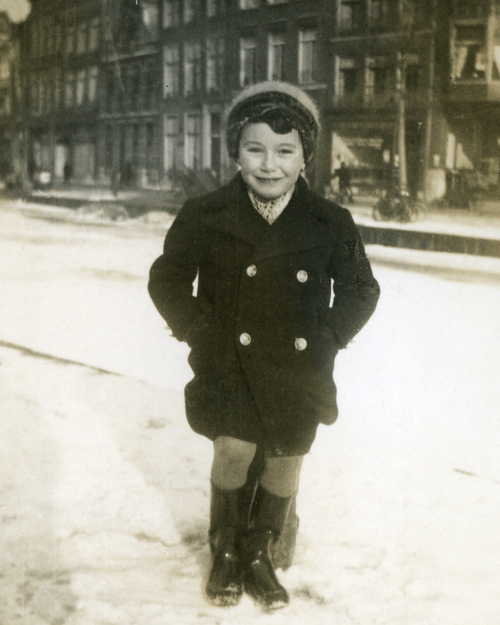 Donald was an only child. His father Martijn had a rather up-market men's fashion shop in Leiden and was married to Olga Hes. They were a liberal Jewish family but shrimp or pork was not eaten at home. Every now and then his father used to go to the Shul to make up a minjan. Donald experienced his youth up until the outbreak of the war as carefree and very loving.

Group of ten Jewish men over 13 required for certain prayers and consequently for Jewish religious services as well. 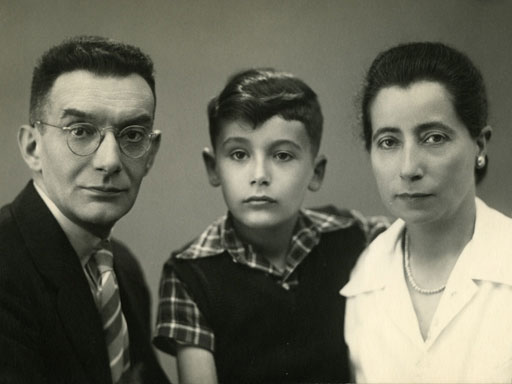 In Leiden my bedroom bordered on to theirs. In the door between our rooms a peep-hole had been made so that I could hear them talking about the news on the radio the morning the war broke out. It was for the first time that I felt that we as Jews were a separate group. The war made me into a Jew. It made me aware of being a Jew and what the consequences were.

The war became a close threat when father Martijn lost his business. It fell into the hands of a ‘verwalter’. The De Marcas family had to leave their home on Botermarkt and moved in with the Mok family. One evening there was a raid and the De Marcas family was taken to the Hollands Spoor Station where the train to Westerbork Camp stood waiting. However, they could return home because shortly before father Martijn had become a member of the Leiden Joodsche Raad.

In October 1940 all firms under Jewish ownership or in which Jews had a dominant stake had to be registered with the Wirtschaftsprüfstelle (corporate inspection service), after which they were assigned a Verwalter (or caretaker) by the Nazi authorities. All the firm‘s transactions had to be approved by this Verwalter from that point onward. Once the Jewish owners had been deported, their firms were confiscated, liquidated or sold.

See verwalter in the glossary of JoodsMonument.nl

Now we really had to go into hiding. "You will be all right with my brother, Meindert Zaalberg," said Aunt Truus Rensink, an acquaintance of my mother’s who sang with her in the choir of the Nederlandsche Vereeniging van Huisvrouwen [the Netherlands Housewives Association] and the Toonkunstkoor.

‘Uncle Meindert’ had a pottery and was active in the Resistance. After a while it seemed more sensible to take Donald somewhere else and thus spread the risk.

For a short while Donald stayed with Reverend Dijk. It was an address at which he was to return several times. It functioned as a temporary shelter.

Donald was then placed with a family where he had to stay in his room all day. He was very lonely.

From my room, a nice front room on the first floor, I could look out into the street. Some children were playing hide and seek, others with this skipping rope. I became homesick and wrote long letters to my parents. Our contact in the Resistance, Uncle Slothouwer I called him, delivered them.

Meindert Zaalberg found a new address for him with the Marijnissen family, where Donald was lovingly welcomed. ‘Uncle Toon’ and ‘Aunt Net’ had a young son ‘little Jan’ and an Alsatian.

I slept in an attic room with a small window. If there was a thunderstorm and I was scared by the lightning I could sleep between Aunt Net and Uncle Toon. I had good time there.

Because Donald’s hair was rather dark, which was conspicuous, his hair was treated with hydrogen peroxide.

I would have to stand on a stool, hang my head over a bowl and Aunt Net would soap my hair. The stuff that she rubbed into my hair had to soak in. Then she would rinse it under the water pump. And then my hair would be light brown.

Because there was a rather loose-lipped priest, even though he meant the best for Donald, the Marijnissen family thought it would be safer to find a new place for him.

Donald stayed again for a short while with Reverend Dijk where one day his parents came to see him. They were still in hiding with Meindert Zaalberg.

Late that evening two shady figures appear in the darkened room: my parents. They came to see me and the Reverend had made sure that we were by ourselves. "Hello Auntie," I said to my mother. That word was forever on my lips because I said it to every woman. Me using the word Auntie, pronounced in the Brabant dialect too, meant that my salutation hit my mother like a sledge-hammer.

Donald was subsequently placed in the boys’ orphanage of the Brothers in Tilburg. There he went through life as Jan van den Heuvel. There were three other boys in hiding in the orphanage: a Jewish boy and the two sons of a Roman-Catholic Resistance worker. Donald was part of all daily routines and tried to stand out as little as possible. 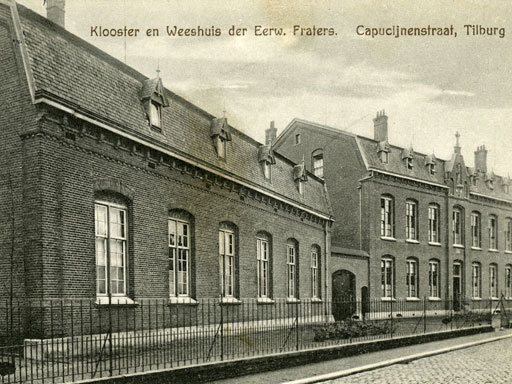 Occasionally one of the orphans would notice that I was different. "Why does Jan never take Holy Communion?" one of them once asked. And another one: "Why does Jan never have to go to confession?" But for Holy Communion and confession you have to be a Roman Catholic. Because I went to church so often I knew exactly how the Mass went. And I knew exactly when an altar boy made a mistake. I begged and prayed to be allowed to be an altar boy; I loved the theatre of it. But to be an altar boy you also had to be baptised.

The south of the country was already liberated in the autumn of 1944 but the north, where Donald's parents were in hiding, was still under German occupation. Together with one of the Brothers, Donald regularly listened to the radio. 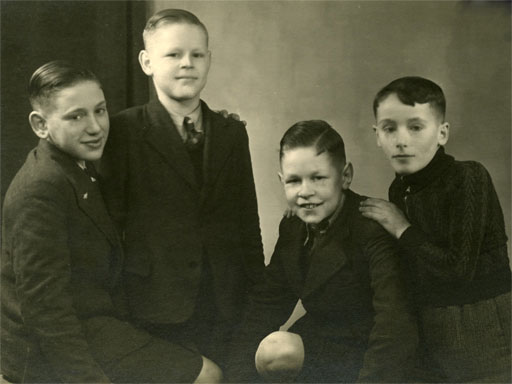 I remember that there was a man who always ended his talks on Radio Oranje with the words: "They can wait no longer, not a day, not a night." But one day he said: "They can wait no longer, not a day, not an hour." I jumped out of my skin. We'd heard of a famine, of the Hunger Winter [in the Hunger Winter of 1944-45, at the end of the war, around 20,000 people died of starvation and the cold because of the shortages. Especially in the major cities there were a great many casualties. In this period the Germans blocked all food and fuel transports to the west of the country as a reprisal for the airborne landing at Arnhem]. If they couldn't wait for one hour, what did that mean for my parents?

After the liberation Donald was reunited with his parents. They couldn't move back into their home immediately; it had to be vacated first.

It proved not easy to build up the relationship with my parents again. I had outgrown them. And the discovery that their whole family had been killed off created a distance. They were locked into their sorrow. Moreover they had to work very hard to build up the men's fashion shop. That wasn't easy: my father was 56 and the shop had been completely emptied out. Even the panelling of the shop had been burnt as firewood. 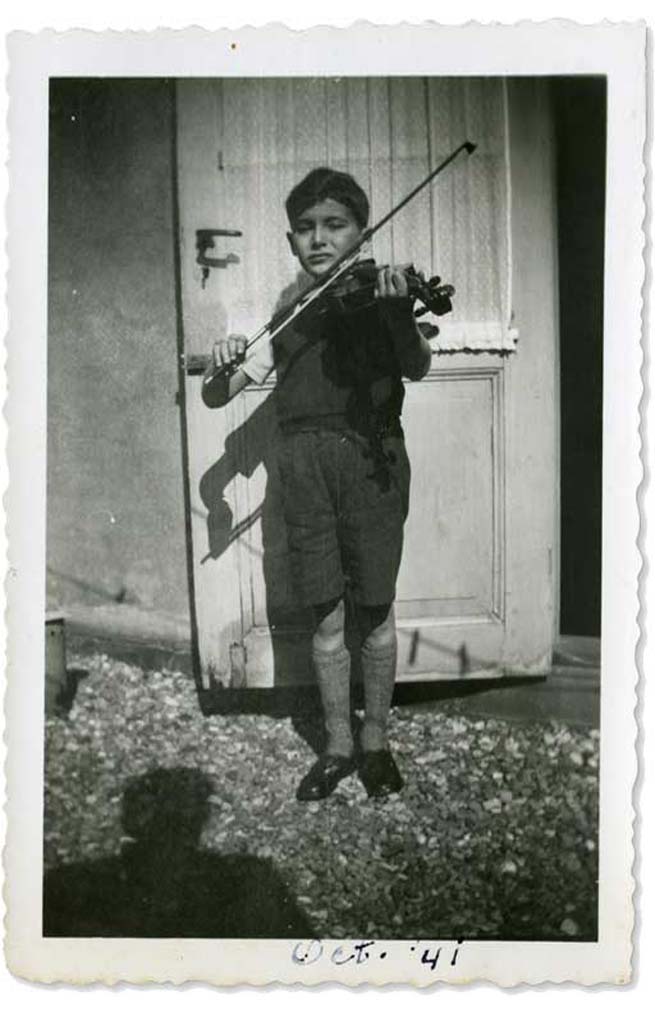 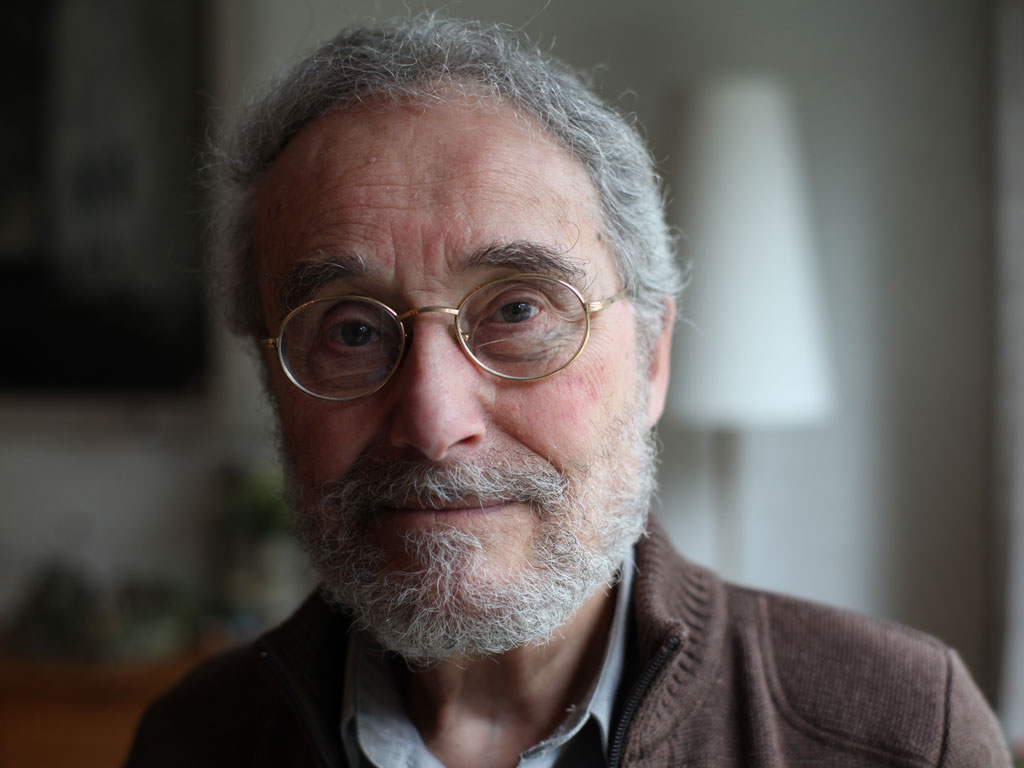